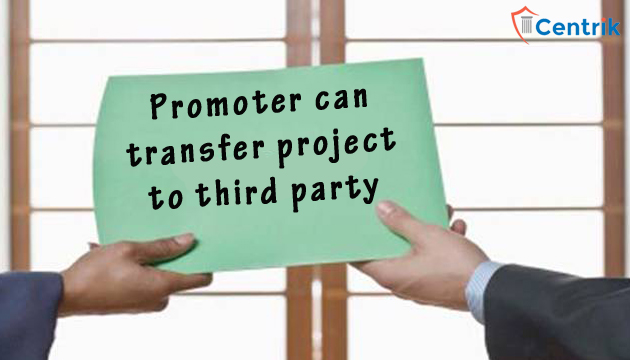 Real Estate Sector is the major sector that is facing economic slowdown within the previous couple of years with job losses, unfinished projects, and impending litigation. Due to slump in the Real estate sector, mergers & acquisitions have increased over the last few years for revival of the stuck projects. Due to ongoing economic slowdown in the real estate industry, it had been predicted that due to the unavailability of funds from banks and developers getting bankrupt, small developers will get into joint ventures, mergers, and acquisitions for their survival within the market. Therefore, keeping in mind the situation of the Indian economy, it had been a well-thought move of the legislature to include Section 15 under RERA.

There could be innumerable situations where you as a promoter voluntarily or involuntarily will need to change the control of the project or transfer or assign your rights to the third party for any reason. If you are a promoter facing issues in transferring the rights to a third party or a new promoter.

Section 15 and MahaRERA Circular No. 24/2019 provides the procedure for transferring or assigning the promoter’s rights and liabilities to a third party the procedure. The intention of the legislature in formulating Section 15 was to guard the interest of homebuyers when third party rights are created by the promoter and provide for obligations of a new promoter. It specifically deals with the consolidation and collaboration issues and provides for the procedure to be followed when there is a change in a promoter of a project due to merger or amalgamation.

“The promoter shall not transfer or assign his majority rights and liabilities in respect of a real estate project to a third party without obtaining prior written consent from two-third allottees, except the promoter, and without the prior written approval of the Authority”.

PROCEDURE TO BE FOLLOWED FOR APPROVAL

The procedure for transfer of rights to a third party where the transfer is initiated by the promoter is as follows:

2/3rd Consent of allottees and consent of regulatory authority is not required in the following cases:

1. Change in internal shareholding or constituents of promoter’s organisation

In case of changes in internal shareholding or constituents of promoters organisation will not affect the rights and liabilities of allottees and promoter’s organisation, above-mentioned approvals are not required.

3. Amalgamation or merger of companies

In case of mergers of companies wherein amalgamation is initiated by promoter and amalgamating company has one or more project registered under RERA and one of the projects is transferred, the promoter is required to obtain 2/3rd consent of allottees however such approval is not required when: i) all liabilities of the amalgamating company relating to the demerged undertaking, should be transferred to the amalgamated company /resulting companyii) 75% of the shareholders remain same in the resultant company, the same shall not require the aforesaid approvals of Allottee (s) under section 15 of the Act.

In case of enforcement of security by lenders either by operation of law or by way of enforcing the security wherein charge or security is disclosed on the RERA website in the details of the project. In such cases approval of allottees is not required but intimation to regulatory authority is required which is as follows:

i) the promoter shall write to the Secretary, MahaRERA, on secv@n-raharera.mahaonline.sov.in manner prescribed within seven days of being aware of such transfer.

ii) The Promoter shall also inform each allottee of the Project of such transfer.

iii) Moreover, a Financial institution or creditor initiating such transfer is required to intimate within 7 days to each of the Allottee(s) and Secretary MahaRERA on secv@maharera.mahaonline.Sov.in of enforcement of the security which has resulted in the transfer.