Ponzi Schemes Versus The Government of India 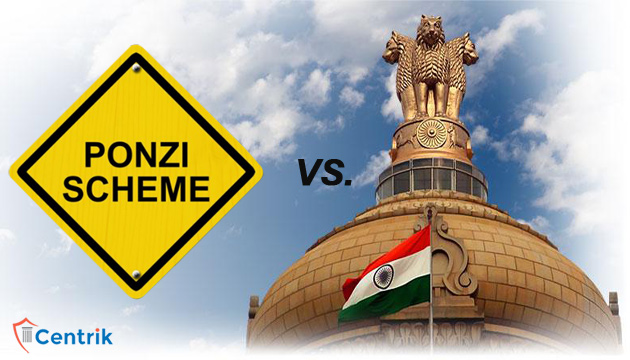 Before we get into the intricate details of this topic, we first need to understand the basic meaning of the term ‘Ponzi Scheme’.

What is a ‘Ponzi Scheme’?

The term ‘Ponzi Scheme’ has been coined after the name of a fake businessman Charles Ponzi, who acted as a businessman in Boston and notoriously gave effect to such above mentioned frauds.

Why the Government of India is concerned about Ponzi Schemes?

In India, these days, we are often hearing about various notorious purported businessmen and Companies who are making money out of such ‘Ponzi Schemes’ and who suddenly disappear once ample benefits are reaped out of such frauds.

Some of the highlighted examples of such Ponzi schemes in India are the Social Trade Scam, Qnet Scam, Sarada and Rose Valley, etc. Till date, the Government has no specific act or mechanism to curb and control such schemes. Any person if proved to be guilty for such an act shall be punishable for cheating, fraud, etc. under the Indian Penal Code. However, in light of the increasing number of cases of such Ponzi Schemes, the Government of India has now deemed it necessary to take requisite steps to take actions against such notorious entities.

What steps has the Government of India taken to control the aforesaid matter?

The Government has moved a bill in the Parliament to crack down on unregulated deposits by barring unregistered entities and individuals from accepting funds from public and also proposed hefty monetary penalties and prolonged terms of imprisonment in case of non-compliance.

The watershed is that even Kitty Parties, committees and other unregistered association of persons are also proposed to be taken under the purview of the proposed bill. In case of corporates, the picture is quite clear that the amounts accepted by Companies in violation of the prescribed rules of the Companies Act, 2013/1956 are considered to be deposits and the penal provisions under the Companies Act, 2013/1956 become applicable thereto. But, there have been loop-holes and lack of regulatory checks, on the basis of which some business entities and Companies thrive on the amount of money received by the public.

What kind of penal provisions are proposed under the said bill?

In case of violation with the rules of the proposed bill like failure in getting the business registered and still accepting deposits, there is a proposed jail term which may vary from 5 to 7 years and in case of repeated offence, the term may extend up to 10 years.

Further, an extortionate penalty of upto Rs. 50 crores has also been proposed. Furthermore, the Government has proposed that the offences covered under this bill be made cognizable and non-bailable. Also, the police shall be granted the powers to search and seize without any warrant.

Quoted text of the Statement of Object and Reasons of this bill:

As per the statement of object and reasons of this bill, “the bill seeks to put in place a mechanism by which depositors can be repaid without delay by attaching the assets of the defaulting establishments”.

What reliefs will the aggrieved person will get from the enactment of this bill into an act?

As per the proposed bill, the depositors under this scheme shall be given priority while repayment as compared to other stakeholders.

To wrap up, the proposal of such a bill in India may prove to be revolutionary to curb the growing cases of ‘Ponzi Schemes’ and thus, may prove to safeguard the interest of the investors from such purported and fake notorious businessmen.