One homebuyer alone can proceed against the builder to Bankruptcy Court 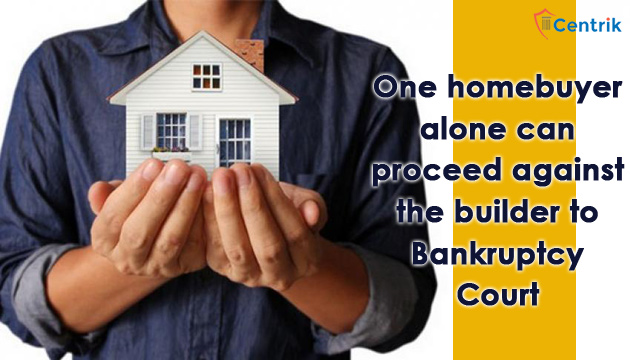 Homebuyers have always been at the mercy of builders. They invest money in their homes but have no control over when they will get possession. In some cases, possession has been delayed for more than five years.

But all that will change now. The government has handed homebuyers a potent weapon against errant builders. President Ram Nath Kovind has given his nod to promulgate an ordinance amending the insolvency law, recognising homebuyers as financial creditors to real estate developers.

What does the ordinance say about it?

Under the Insolvency and Bankruptcy Code Amendment Ordinance, 2018, homebuyers will get due representation in the committee of creditors (CoC) that takes a call on resolution proposals, making them an integral part of the decision making process.

Homebuyers would be able to invoke Section 7 of the IBC against errant developers. Section 7 allows financial creditors to file application seeking insolvency resolution process. The move also comes at a time when many home buyers are facing hardships on account of delayed and incomplete real estate projects.

Corporate Affairs Secretary Injeti Srinivas said, “Even if one homebuyer moves the NCLT (National Company Law Tribunal), the company can go in for insolvency. That is the intention of bringing them into the creditors fold.”

“Homebuyers must organise themselves into one group against defaulting builders,” said Housing Minister Hardeep S Puri in an interview to ET Now.

However, the amended Insolvency and Bankruptcy Code (IBC) does not specify if homebuyers will be treated as secured or unsecured creditors. “The homebuyer will have to prove which category of creditor he is qualified to be as per the agreement with the real estate company,” Srinivas said.

Insolvency and Bankruptcy Board of India will frame the detailed mechanism of representation of the homebuyers on the committee of creditors. Once it is brought into force the homebuyers will be able to proceed to NCLT against the rogue builders and retract their money which is hard earned and many of them are paying EMIs on the loan taken to purchase the house. This amendment was most awaited and have given positive hopes to the buyers. How effective it turns out to be will depend upon the fast resolution.