Occupation and Completion certificate to be withdrawn in case of incomplete projects: Haryana RERA

CentrikBlogsBusiness AdvisoryRERA ConsultingOccupation and Completion certificate to be withdrawn in case of incomplete projects: Haryana RERA 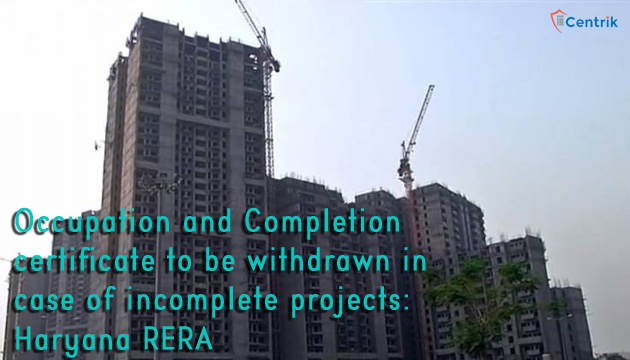 “Justice cannot be for one side alone, but must be for both”

The real estate (Regulation and Development) Act, 2016 came into full force in the year 2017. Section-3 of the Act mandated registration with the newly formulated state RERA authorities but the rebate was given to projects which have already procured occupation and completion certificates. In order to fall under the exception all ongoing projects rushed to get the certificates issued.

This hasty act of the promoters resulted in a chaos where projects which were not yet completed also procured the certificates. This added to the already existing problems of the aggrieved homebuyers as promoters started pressurizing them to take possession on the basis of fraudulent certificates; despite the projects being incomplete.

The authority clearing out the law stated that completion work includes all types of external and internal works such as roods, pathways, tree planting, community building etc. This order of the Haryana RERA Authority will have very vital ramifications on other states also. The order has come as a ray of hope for all the buyers present in the state of Haryana.

The ruling has protected what the act was meant for and also went ahead to safeguard the interests of aggrieved homebuyers. What the future holds nobody knows but we can wait and watch that how this ruling will impact other states.