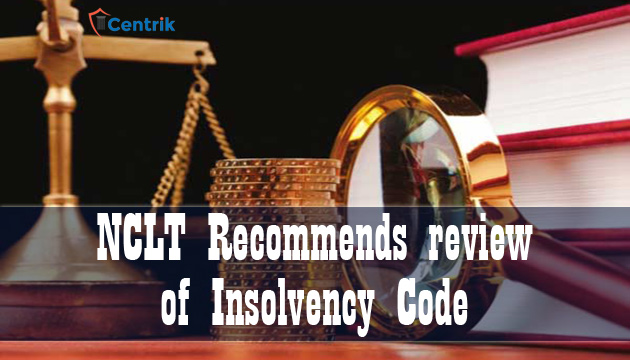 The NCLT acts as the Adjudicating Authority for Insolvency cases and exercises unhindered judicial powers over such cases. No other court can interfere with the matters of NCLT.

The National Company Law Tribunal (NCLT) has suggested to IBBI that there is a need to review the insolvency code regulations to ensure that they are not “misused or misinterpreted”.

What changes it has suggested?

It also said that the resolution professional (RP) should be competent and independent so that there are no interruptions in the process which lead to delays in disposal of insolvency cases.

Besides, it has said the claims of operational creditors are neglected or ignored as the Committee of Creditors (CoC) has supremacy of the financial creditors (banks and financial institutions) who have control over the entire process.

Nobody is taking care of operational creditors’ claim, said the NCLT Kolkata Bench in its order passed last week on the Binani Cement matter.

“It is time to recognise their voice also in the committee of creditors,” it said, suggesting changes to the Insolvency and Bankruptcy Board of India (IBBI).

In the 60-page order, the tribunal has also raised concern about the functioning of RPs, saying it has been receiving several pleas from stakeholders on issues such as transparency, arbitrariness and delays in the process says NCLT. While citing Binani Cement case, the tribunal said: “In the case in hand, 12 applicants came forward …for not following the process mandated under the code by the resolution process. The arbitrary way of dealing with the cases has always led to interruptions and also caused delay in disposal of cases.”

According to NCLT, while there is a need for reforming the regulations of the insolvency code to ensure that it is not misused or misinterpreted, there can not be any question that independence and competency of RPs are essential for preserving the objective of the code in a transparent manner leaving no room for interruption from any corner.

The NCLT Bench of Member-Judicial Madan B Gosavi and Jinan K R said: “Hopefully, we believe that IBBI take note of all the above observations and  do the needful review of the Code and regulations’.

Referring to the Binani Cement case, NCLT said here the RP is a CA by profession and he failed to take business decisions to run the corporate debtor on his own. He managed to run the company by appointing about 22 representatives, who are from his own partnership.

A resolution professional, like the RP in a case of this nature, needs some basic training for handling the resolution independently, efficiently and tackle the multiple questions from different stakeholders, said NCLT order, passed on May 2.

Whenever a new law is enacted, a lot of flaws also comes up with it. In order to deal with the flaws the legislative has the authority to amend it so that it can be accordingly dealt with the changing trends. NCLT has observed the flaws in the very early stages and have brought into notice of the IBBI. It would be wise of them to bring these changes as soon as possible to create its impact more.