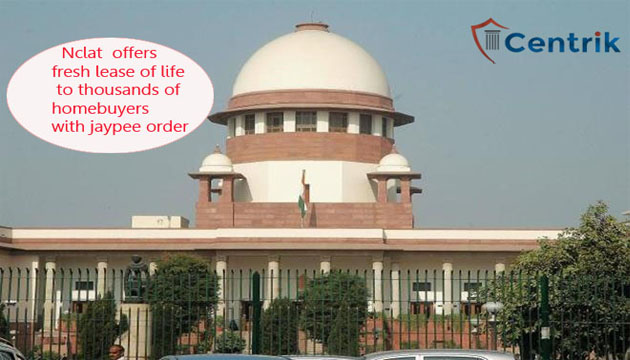 In a recent order given by the NCLAT, thousands of homebuyers have been given a fresh lease of life as the appellate body has ordered fresh round of bids for debt-ridden Jaypee Infratech Limited. The recent order has potentially saved the company from going into liquidation and causing loss to the home buyers whose fate has been entangled with that of Jaypee Infratech.

The Hon’ble NCLAT opined that in view of the extraordinary circumstances pertaining to the case, they were bound to extend the 270-day resolution period. They subsequently also deducted the 90-day litigation period in the case. Hon’ble Justice S.J. Mukhopadhyay who was heading the bench in the case said the bidding process will be open to all the parties that are eligible to file resolution plans under the IBC. As the case has a direct impact on the investments made by aggrieved homeowners, the appellate body has time and again through its orders laid emphasis on arriving at a viable resolution plan so that the homeowners can recover their money and not be left in the lurch.

It was also the order of NCLAT that promoters of Jaypee Infratech Private Limited won’t be allowed to bid in the resolution process. The real estate company owes a consolidated sum of Rs. 9,800 Crore to the homebuyers and is yet to build and handover 20,000 flats to the homeowners. With the NCLAT ordering a fresh round of bidding, companies like Suraksha Realty Limited and NBCC(India) Limited will also be eligible to bid. As the NBCC’s resolution plan was earlier rejected by the NCLAT, they will now have to file a fresh resolution bid.

Thus, the court has set the record straight in this ongoing matter and given ample time to parties involved in the case that would now want to submit fresh resolution plans for the insolvent company, Jaypee Infratech Private Limited. The company was shortlisted by the Reserve Bank Of India about two years back as one of the 12 largest corporate accounts for insolvency proceedings but as none of the resolution plans were considered viable enough by the Committee of Creditors in the first 270 days, the Hon’ble Supreme Court prevented liquidation by restarting the process in the best interests of the homebuyers and also gave them 58% of the votes in the Committee Of Creditors.