NCDRC or RERA: The highs and the lows 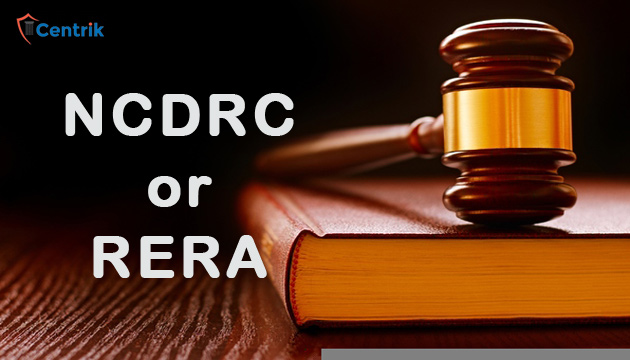 A very welcoming step was taken by the Central Government by enacting the Real Estate (Regulation and Development) Act, 2016, which was profounded to ease the difficulties and the harassment being suffered by the buyers at the hands of the errant Builders. That the said act was brought into force to minimalize the multiple litigations prevalent in the field of real state by making one stop adjudicating authority i.e. the Real Estate Regulatory Authority under the RERA Act for adjudication of the grievances of the buyers against the errant builders in every State of the Country.

Although, RERA has been made as the singular authority to deal with the grievances arising out of the real estate sector but there still exists a question as to whether a case can be filed before the National Consumer Dispute Resolution Commission under the Consumer Protection Act, 1986 for the adjudication of such cases. Well, the answer to the same may be enumerated from the points discussed herein below.

The National Consumer Dispute Resolution Commission, as the name itself suggests was established under the Consumer Protection Act, 1986 as the apex authority under the act to resolve the multi facet complaints of the distressed Consumers owing to the defects in goods or deficiency in the services availed the consumer be it real estate or against the certified edible products or medical complaints, etc. with the jurisdiction to entertain a complaint valued at Rs. 1 Crore and above.

The Real Estate Regulatory Authority has been developed as a cardinal forum under the Real Estate (Regulation and Development) Act, 2016 for regulating and supervising all the activities being carried out in the real estate sector, which starts from the registration of the projects by the builders to adjudication of the complaints of the buyers against the unscrupulous builders. RERA being the foremost of its kind specializes to give reliefs only in the field of real estate sector in a very wide sense covering almost all the aspects of the real estate sector and has been established only for effectuating the early disposal of the cases.

Therefore, in order to conclude it must be said that the Real Estate Regulatory Authority under the Real Estate (Regulation and Development) Act, 2016 has been enacted for a certain purpose that is to give relief to the aggrieved buyers against the unscrupulous attitude of the builders who aims at deceiving the innocent buyers at their hand, which however will be defeated if the buyers still approach the Consumer Forums for the adjudication of their complaints. That further even the Hon’ble High Court of Punjab and Haryana has also held the fact that RERA has statutory powers to resolve the issues related to the real estate sector and in view of the same the cases are being referred to the authorities for the disposal. Thus in view of the same it is advised that for the purposes of speedy disposal of the cases, the aggrieved buyers should consider filing their complaints before RERA for speedy disposal and effective hearing of their greivences.