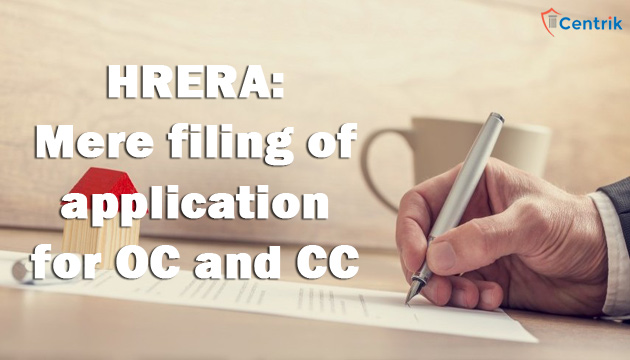 Since the implementation of Real Estate (Regulation and Development) Act, 2016 there has been hue and cry of the deviation of the State rules from the RERA Act. And finally a judgement has been passed by the HRERA, Gurugram Authority, wherein it has been clarified that mere filing of application for OC and CC does not exclude the project for registration under RERA.

In Gurgaon, there are more than 200 projects which was exempted from the purview of RERA to get the registration just because they had filed the application for OC or CC before the implementation of the RERA rules in Haryana.

The home-buyers of Gurgaon have already accused the State Government to dilute the State Rules, wherein in the definition of the ongoing projects they have excluded the projects which are incomplete. The HRERA rules explicitly says if the developer had applied for the OC or CC before the date of the implementation of rules in Haryana then those projects shall not come under the definition of ongoing projects.

On the contrary, in the case of Simmi Sika versus Emaar MGF Land Limited it was stated by the RERA authority that mere filing of application for OC or CC to escape the liability to get the registration under RERA is not appropriate act in the eyes of laws. The conclusive proof of the completion of the development is the issuance of Completion Certificate by the competent authority.

The Authority also ordered that where partial Occupation or Completion Certificate have been issued by the Authority and still the development work is incomplete then those projects shall also come under the ambit of RERA for registration and no exemption will be granted to them.

During the proceedings it was also ordered that DTCP shall be requested to withdraw the OC or CC issued for the incomplete projects and also to begin the investigation that how such certificates were obtained, for these projects time of one month shall be given to the promoters otherwise penal provisions of the Act shall apply.

In the light of above we can reach to the conclusion that only those projects which have got Completion Certificate before the implementation of the rules in Haryana are exempted for the registration under RERA.