Legel remedies to get refund on stalled projects: An Analysis 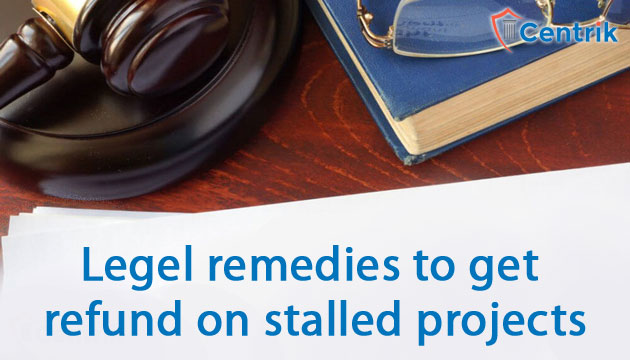 Since a decade now, it has been observed that the Builders and Real Estate Companies use various schemes and methods to allure the buyers for bookings into their projects. They make various promises and representations, believing upon which the buyers choose that specific project. But after the booking, or say at the time of delivery, expectations of the allottees faces a very harsh reality. It has become a general practice to delay the possession for various reasons with a sole motive to benefit the builder.

Possession/Delivery is delayed due to various reasons, some reasons are:

What is Stalled project ?

There is no specific definition but generally if the project has been delay for an extra-ordinary time, no major construction work is pending, building is not responding or giving false commitments, it may be called as “Stalled project or struck project”. Further the buyers are in stalemate as neither could they get the possession nor they could get any benefit of their hard earnedmoney. The builder’s behavior during the delayed period is very incomprehensive.

The Central Government realized the suffering of the buyers and brought Real Estate (Regulation and Development) Act, 2016 (“RERA Act”) into place and also directed the States Governments to make rules and regulations immediately to implement it in their States. RERA Act has now become a very useful method to get a relief against the law violating Builders.

“Return of amount and compensation: –

(1) If the promoter fails to complete or is unable to give possession of an apartment, plot or building,-

(a) in accordance with the terms of the agreement for sale or, as the case may be, duly completed by the date specified therein; or

(b) due to discontinuance of his business as a developer on account of suspension or revocation of the registration under this Act or for any other reason,

he shall be liable on demand to the allottees, in case the allottee wishes to withdraw from the project, without prejudice to any other remedy available, to return the amount received by him in respect of that apartment, plot, building, as the case may be, with interest at such rate as may be prescribed in this behalf including compensation in the manner as provided under this Act:

Provided that where an allottee does not intend to withdraw from the project, he shall be paid, by the promoter, interest for every month of delay, till the handing over of the possession, at such rate as may be prescribed.”

The section also provides for interest for delay to be paid for each month.

RERA could be said to be a new and evolving law but, speaking from experience, it has been proved to be a very helpful law for providing reliefs to the strangled allottees. RERA deals with the complaints of the buyers in a very time bound manner and is inclined to provide an immediate relief, if possible.

Now days, buyers have become very much aware about their rights and the builders face very stringent measures from the RERA Authorities, if they breach any provision of the RERA Act or any clause of the agreements signed between the Builder and the buyer.

Observing the conduct of the RERA while seeking relief for our clients, we believe that the general reasons used by the builders to evade the Courts have become infructuous and the builders are bound to honor the RERA Act and the terms and conditions of the agreements signed between the builder and buyer.

Disclaimer – The above article is based on the personal interpretation of related laws and judicial pronouncements, which may differ person to person. The readers are expected to take expert advice while placing reliance. For more information, please contact at support@centrik.in