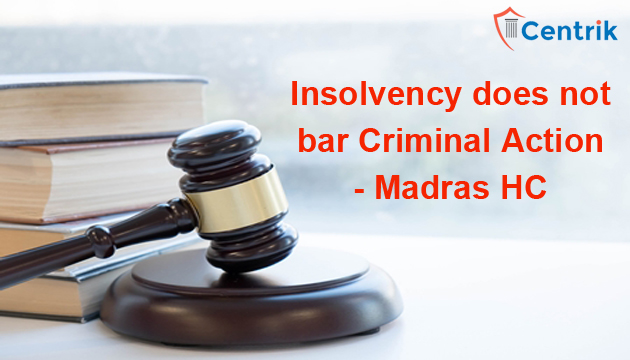 In the matter of Mr. Ajay Kumar Bishnoi vs M/S.Tap Engineering

The Petitioner here was the former Managing Director of M/s Tecpro System Limited. The Petitioner-company had undergone the Corporate Insolvency Resolution Process (CIRP) under Section 31 of the Insolvency and Bankruptcy Code, 2016 and moratorium in terms of Section 14 of the Code was declared, during the pendency of the complaints regarding the dishonour of cheque. Here, the Petitioner company had issued post-dated DBS bank cheques to the complainant towards discharge of their liability, which were returned due to “insufficient funds”.

In the said matter the Petitioner approached the Hon’ble High Court of Madras for quashing of proceedings initiated by the respondent under Section 138 of the Negotiable Instruments Act, 1881 as non-est in the eyes of law and consequently directed the respondent/complainant to pursue their remedies as per the provision of Insolvency and Bankruptcy Code, 2016.

THE HON’BLE HIGH COURT OF MADRAS HELD THAT:

The Hon’ble High Court of Madras vide its Order dated 09.01.2020 delivered a significant verdict in this matter and held that acceptance of the Corporate Insolvency Resolution Plan under Section 31 of the Insolvency and Bankruptcy Code, 2016 (IBC) cannot be a ground for quashing the prosecution initiated under Section 138 of the Negotiable Instruments Act, 1881 (NI Act) against the corporate debtor and its officials.

OBSERVATION OF THE HON’BLE COURT:

“No clause in the Corporate Insolvency Resolution Plan even if accepted by the adjudicating authority/appellate Tribunal can take away the power and jurisdiction of the criminal court to conduct and dispose of the proceedings before it in accordance with the provisions of the Criminal Procedure Code.”

The Court further discussed the various provisions of Company law, Criminal Procedure Code, Insolvency and Bankruptcy Code and referred to various decisions of the Tribunals to say that the terms “suits and proceeding” appearing under Section 14 of the Insolvency and Bankruptcy Code does not include criminal proceedings within its ambit and has not intentionally been included by the legislature.

In response thereof, it was submitted by the Petitioner that the IBC was a self-contained enactment having an overriding effect over other laws. Therefore, a continuation of the impugned prosecution under NI Act would only amount to an abuse of legal process.

The Hon’ble Court held otherwise and further explained that the main object of Section 138 of the NI Act is to safeguard the credibility of commercial transactions and to prevent cheques bouncing by providing a personal criminal liability against the defaulter of the cheque in public interest. Therefore, even if the resolution plan was approved and made binding on the corporate debtor and its employees, members, creditors, guarantors and other stakeholders under Section 31 of the IBC, criminal proceedings under Section 138 will not abate.

In view of this ruling it is clear that the object of the IBC is to provide for insolvency resolution in a time bound manner for maximization of value of assets. It has not been enacted to provide succor to those who by their misconduct contributed to defaults of the corporate debtor.

The Petitions were dismissed and this judgment has come as a big relief to persons pursuing realization of their cheque amount against companies or persons undergoing the Corporate Insolvency Resolution Plan proceedings. There is a reaffirmation that the moratorium granted by the Court does not cover pending criminal litigation.