Industrial Unit are not Covered under RERA- MAHARERA 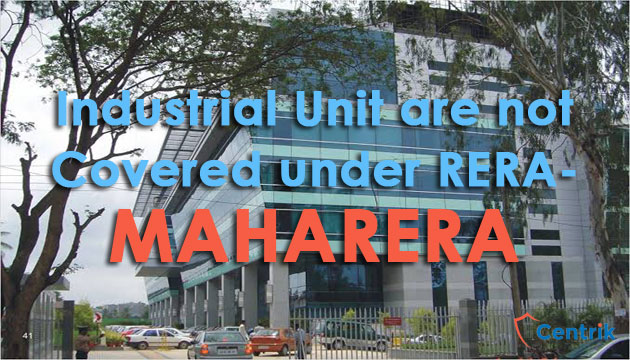 Recently, the MahaRERA authority has passed an order holding that the industrial units are not covered under RERA Act, lets analysis it.

It is an undisputed fact that the arrival of Real Estate (Regulation and Development) Act, 2016 marked a relief for homebuyers or consumers. But the recent ruling delivered by Maharashtra Real Estate Regulation Authority (MAHA-RERA) has provided an interpretation in favor of the Project Developers. The Authority in course of dealing with a complaint filed in respect of the failure of the Project Developer – Renaissance Indus Infra Pvt. Ltd. to deliver the possession of the agreed unit to the complainant- Techno Drive Engineer Pvt. Ltd.

Analysis of the Ruling

The MAHA-RERA was faced with question of determining the extent of an application of RERA or in simpler words what does RERA includes and what it excludes. The authority examined the document presented and observed that-

Further, the authority observed that the complainant has booked unit for setting up their industrial manufacturing unit and hence, the booked units by the claimant are industrial units. Then it moved towards comparing the definition of “Apartment” under RERA with the definition of “Flat” under Maharashtra (Ownership of Flats) Act, 1963. The Authority then concluded that RERA does not include ‘industrial units’ under it and thus an express exclusion of ‘industrial units’ from its powers. Therefore, the authority concluded that any building consisting of a industrial or parts there of will not be covered under RERA.

Impact of the Ruling

Therefore, to an extent this ruling has changed the dynamics of working of Real Estate Regulation Authority.Through, these quick-witted decisions by the RERA authorities, a new layer for a better and an effective laws are under process for establishing an affable relationship between builders and buyers at the same time, it can be foreseen that soon a new forcible law might pave its way for enforcing matters pertaining to the industrial unit buyers.

Disclaimer – the above article is based on interpretation of the related judicial pronouncement and related laws which may differ person to person. The readers are expected to take expert opinion before placing reliance on ti. For more information, please reach us at support@centrik.inor call us at 8383011629