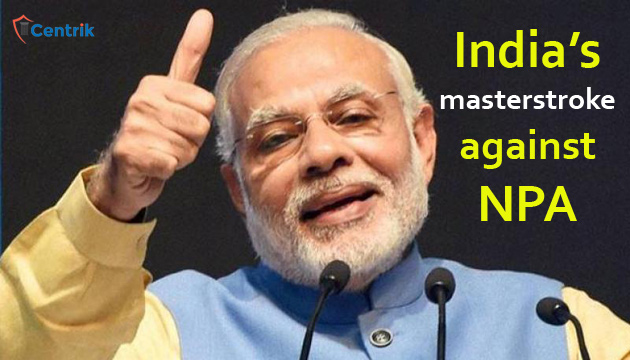 Bhushan Steel Limited is the largest manufacturer of auto-grade steel in India. Bhushan Steel, with a large amount of debt in proportion to its equity (3.5 times more), is a highly leveraged company. The company’s consolidated debt stands at ₹31,839 crore, having risen 18 per cent from a year ago. The Company is spending Rs. 260 billion to expand its capacity to 12 million tonnes annually from the present installed capacity of around one million tonnes.

Insolvency proceedings were initiated against the company on 26 July 2017 under the Insolvency and Bankruptcy Code, 2016

An insight to the story

With the major Rs 36,400 crore buyout of debt-ridden Bhushan Steel by a Tata Group company and many more to come under the Narendra Modi-led government’s IBC reform, India  gains a strong footing in its war against NPAs. Notably, Bhushan Steel was the largest account in among RBI’s 12 big accounts identified for an immediate resolution. These 12 accounts, constituting 25% of country’s total bad loans, were subsequently admitted by insolvency court National Company Law Tribunal (NCLT).

Describing the development as historic breakthrough in resolving bad loans of banks, interim Finance Minister Piyush Goyal said that this is a record step towards resolving the legacy of unprecedented amount of bad bank loans inherited by this Government.

Notably, Bamnipal Steel, (BNPL), a wholly-owned subsidiary of Tata Steel, has successfully completed the acquisition of controlling stake of 72.65 per cent in Bhushan Steel Ltd (BSL) for around Rs 36,400 crore, according to a statement by Tata Steel. Further, the firm has received all government clearances in acquiring Bhushan Steel. “Lenders recovered almost entire principal loan of Bhushan Steel through Rs 36,400 crore transparent bid by Tata Steel and also got 12 per cent stake in the company,” Piyush Goyal noted in another tweet.

The acquisition signals a major breakthrough in India’s NPA war, as the recovery amount is over 90 per cent of the principal amount, according to a tweet by principal economic advisory in the finance ministry Sanjeev Sanyal. Following this, now the focus will shift on other major accounts in bid to recover over Rs 1 lakh crore. Things seem to be moving in a steady pace, as VTB-led Numetal, a prominent bidder for in debt-laden Essar Steel has said that they have made a bid of Rs 37,000 crore in the second round of bidding for the bankrupt steel company while pleading that the court should order the lenders to scrap the first round.

Following this resolution, now the focus will be on other major cases such as Amtek Auto which has a loan default of Rs 14,074 crore in which the UK-based Liberty House has emerged biggest bidder. Notably, the firm has asked the top court to decide on the matter. Other accounts under bidding are Monnet Ispat and Energy for Rs 12,115 crore and Jaypee Infratech Rs 9,635 crore. The total amount of NPAs expected to be resolved soon adds up to over Rs 1 lakh crore, which the banks might not have seen again. The IBC is proving to be a boon for this country’s stressed asset. Looking forward to do well in the Ease of Doing Business, Modi Government has proved successful in implementing the IBC provisions effectively on the biggest defaulting companies alongwith the help of Country’s apex bank and NCLT’s speedy disposal methods. Cheers to the new success and keeping hopes high for India to excel in the business sector.