IBC- Rescue to the Employees 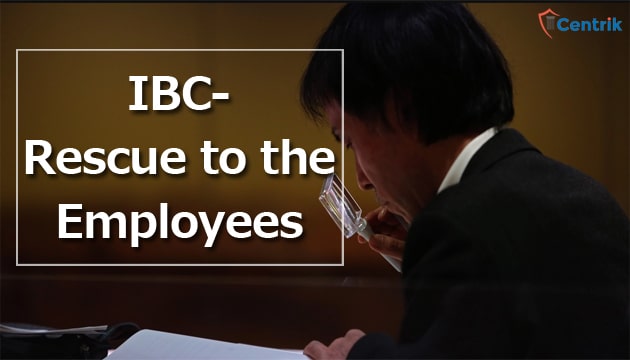 Employees are first to suffer if any organization start defaulting or run in losses or goes for Insolvency or liquidation. In many cases, salaries are not paid for many months then asked to leave one day. Due to the lack of any specific grievance cell, such employees become the victims.

Now, the legislature has addressed the above issue in Insolvency and bankruptcy Codes, 2016 (IBC). According to the provisions of Insolvency and Bankruptcy Code, 2016, all the workmen and employees shall be considered as operational creditors and can approach NCLT under section 9 of IBC if the employees have been denied their salaries or due owed to them by the corporate debtor.

Who is an employee?

An employee is defined as a person who provides his/her services to the employer in respect of which he is entitled to regular or fixed wages or salaries.

A person is an employee if:-
1. A person is employed under the employer or corporate person
2. Drawing a fixed salary or wages
3. Has entered into a contract of employment.

An employee may file petition u/s 9 of IBC after serving the notice of demand u/s 8 of IBC.  In the case of an employee –
1. If the employee is entitled to some salary or wages; debt.
2. The corporate debtor has failed to release the salary for the time period for which the employee provided his services or worked under the employment of the employer or respondent company; default.
3. The employee has issued a demand notice as prescribed under section 8 of BC, to the employer or corporate debtor for the release of the salary due.
4. And neither payment is made nor any dispute is raised pursuant to above notice of demand.

To file the Insolvency Petition under section 9 of IBC, an employee should file under the following relevant documents:-
1. Copy of pay in slips, bank statements, offer letter and other documents to an undisputed debt.
2. Affidavit stating that no notice of dispute has been issued by the corporate debtor.
3. Copy of bank statement stating that no amount has been paid by the debtor.
4. Any other documents which can establish the debt and default.

In the case of Nitin Gupta vs. M/s Applied Electronic Pvt. Ltd., an employee filed an application under section 9 of IBC for non-payment of salary. The corporate debtor or respondent company disputed the partial claim and accepted partial dues. NCLT admitted the application and observed that

In case Mr. N Subramanian vs. Aruna Hotels Limited, an application was filed by an ex-employee, claiming the salary due since the year 1999 under section 9 of IBC. The employee requested several times to the corporate debtor to release the salaries due. The respondent company raised the dispute and objected that the said claim is time-barred. NCLT rejected the contentions raised by the corporate debtor as the respondent company has assured to the employee many times through letter due to which the claim was not time-barred. Thus, the insolvency petition against the respondent company was admitted.

NCLT and NCALT have very well identified the grievances of the employees and redressed them by passing the reasonable and justified orders. In the light of the above provisions and decisions laid by NCLTs/NCLATs, it is advised to the employees to recognize their rights under IBC and approach NCLT to recover their dues in a time-bound manner.