IBC- Greatest rescue for the homebuyers 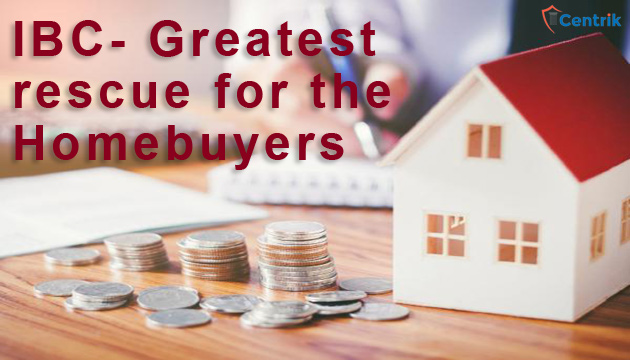 The legal regime got changed after the coming of amendment dated 6th June, 2018, according to which the homebuyers were included in the definition of financial creditors. Also, an explanation was added to section 5 (8)(f) as per which “any amount raised from an allottee under a real estate project shall be deemed to be an amount having commercial effect of borrowing.”

Homebuyers under IBC, till now

After receiving the status of financial creditors, homebuyers approached NCLT against enormous developers and succeeded in commencing corporate insolvency resolution process against the developers’ companies.

Otherwise, if there is no assured return plan incorporated into the builder buyer agreement entered into between the homebuyer and builder then firstly, the homebuyer had to approach Real Estate Regulatory Authority (shortly RERA) to seek refund. Once the refund orders from the RERA are passed in favor of the homebuyers, thereafter only the homebuyers were entitled to approach NCLT to initiate CIRP against the developers’ company.

But this was a very time consuming process and involved a lot of hustle for those who wished to recover their amount back. Even RERA is rightly oriented towards project completion rather than passing the refund orders.

Recently NCLT has rightly removed the said complications which occurred before the process of approaching NCLT by admitting the insolvency petition filed by the homebuyers in various cases like Alka Agarwal & Ors. Vs. Parsvnath Landmark Developers Pvt. Ltd.  in which the adjudicating authority referred to explanation section 5 (8)(f)

“Even without any element of ‘assured return’ an allottee in the real estate project has to be regarded as a financial creditor.”

Therefore the homebuyers are legally entitled to proceed and file insolvency petition against the developers to recover their amount.

After referring to the above said amendment and decisions made by the adjudicating authorities, I believe homebuyers shall approach NCLT under IBC to initiate CIRP against the developers’ or builders’ company. Even if the element of assured return is present or absent in the builder buyer agreement homebuyers are legally entitled to commence Corporate Insolvency Resolution Process.