HRERA: Applicability of RERA on registration of projects if occupancy certificate has been applied

CentrikBlogsBusiness AdvisoryRERA ConsultingHRERA: Applicability of RERA on registration of projects if occupancy certificate has been applied 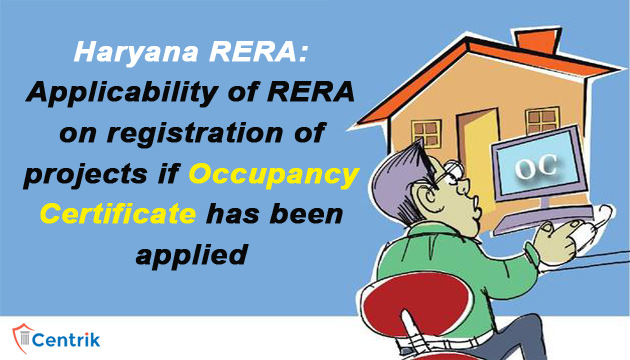 The Real Estate (Regulation & Development) Act, 2016 has been enacted in India in the year 2016 and was given effect on May 1st, 2017 only. The basic purpose of the Act is to facilitate a better functioning of the India’s real estate sector and to bring transparency in such an unorganized and unregulated industry further aiming to fetch multiple benefits to the stakeholders of the real estates. But, like any newly enforced law, there exist some ambiguities in this law too.

One of the most heated arguments under this Act is that which project is to be registered/exempted under the provisions of RERA Act, 2016 and for determination of the said purpose, the implications of ‘Occupancy Certificate’ (OC) & ‘Completion Certificate’ (CC) plays a pertinent role.   The said ambiguity further gives rise to the question that whether the application filed for an ‘Occupancy Certificate’ can do away with the requirement of the promoters (builders) to get themselves registered under the provisions of this Act or not?

For better understanding, we need to first understand the meaning of the term ‘Occupancy Certificates’ & ‘Completion Certificate’.

An Occupancy Certificate is one which is issued to the promoters by the competent authority when the premises/ project they have built becomes ready for the home buyers to move in.

In our opinion, RERA, 2016 and its HRERA Rules, 2017 have to a great extent been able to address the above ambivalence as to whether the application made for an ‘Occupation Certificate’ can do away with the requirement of the promoters get them registered with RERA. As per the interpretation of the said HRERA Rules, it is quite clear that merely an application by the promoter for an Occupancy Certificate does not allow him to evade from his liability of getting the project registered under RERA. However, if the Occupancy Certificate has been already issued by the competent authority and Completion Certificate is to be applied/has been applied/ obtained, it exempts the said promoter/project from getting him registered with RERA.

In a nutshell, there are two cases of the applicability of registration of projects under RERA: