How to withdraw application under section-12A of the Insolvency and bankruptcy code, 2016

CentrikBlogsLegal AdvisoryAuthentic Legal AdviceHow to withdraw application under section-12A of the Insolvency and bankruptcy code, 2016 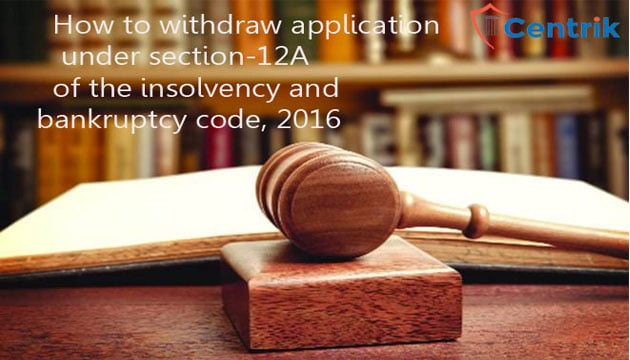 Such stringent provisions created rucks for the parties as once the application was admitted there was no going back.

After the Second Amendment 2018, the NCLT has been granted powers under Regulation 30A read with section 12A to allow the withdrawal of application admitted under section 7 or section 9 or section 10 as the case may be.

That as per the provisions of section-12A an application made by the applicant can only be withdrawn subject to the approval of ninety percent voting share of the committee of creditors. Further, as per Regulation 30A provides for an additional stipulation that an application for withdrawal under section 12A shall be submitted to the interim resolution professional or the resolution professional as the case may be in Form FA who shall then move it before the NCLT.

That as per Regulation 36A this whole process of withdrawal under Section 12A read with Regulation 30A can only be exercised before issuance of an invitation for expression of interest.

An application under section 60(5) of the IBC was filed by the Resolution Professional before the NCLT Chennai in the above-mentioned case seeking withdrawal of the Application moved under the IBC. The Application was however filed after the issuance of the expression of interest reminiscing Section 12A and also Regulation 30A, Thus, the said application was dismissed by the NCLT.

The parties filed a Special Leave Petition titled Brilliant Alloys Private Limited V. Mr. S. Rajagopal & Ors. before the Supreme Court of India against the order of the NCLT. The Apex Court noted that the only reason why the withdrawal was not allowed, though agreed to by the Corporate Debtor as well as the Financial Creditor and the Operational Creditor, is because Regulation 30A states that withdrawal cannot be permitted after the issue of invitation for expression of interest. The Supreme Court allowed the settlement and held as under:

“According to us, this Regulation has to be read along with the main provision Section 12A which contains no such stipulation.

Accordingly, this stipulation can only be construed as directory depending on the facts of each case.

Accordingly, we allow the Settlement that has been entered into and annul the proceedings.”

The Supreme Court did not explicitly strike down Regulation 30A but construed it to be the directory in terms of the facts of each case. In view of the aforesaid decision, the NCLT may permit for withdrawal of Application even after the issuance of the expression of interest (under Regulation 36A of the Insolvency Resolution Process for Corporate Persons Regulations, 2016) subject to the facts and circumstances of each case. It held that such a practice cannot be exercised loosely and has to be done with prudence.

The judgment passed by the apex court in the above-mentioned decision strives to take care of the interest of the parties and allows them to settle or withdraw the application at a subsequent stage also.  Further, the SC is of opinion that the Section-12A is the main section and has no such stipulation and thus Regulation 30A is to be read with the main section. Further, in case a satisfactory settlement is achieved then proceeding further with insolvency solves no purpose because the dissolution of the company is not the objective of the code.