Homebuyers get a relief under the Insolvency and Bankruptcy Code, 2016 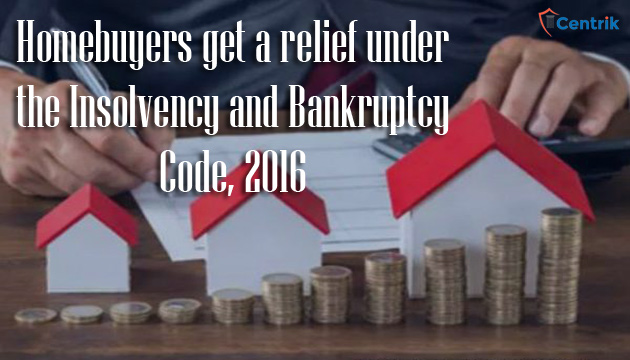 The Union Cabinet approved additional changes to Insolvency and Bankruptcy Code through an ordinance, easing rules to enable promoters of micro, small and medium enterprises to bid for their companies and giving homebuyers a stronger say in the resolution plan for developers.

New changes introduced in the ordinance

What is the relief granted?

The Insolvency and Bankruptcy Code Amendment (Ordinance) 2018 also seeks to streamline bidding eligibility provisions to remove grey areas, a step that’s expected to reduce disputes, people aware of the amendments said. “Concurrence of the President is awaited,” information technology minister Ravi Shankar Prasad said at a briefing after the meeting.

This is the second ordinance issued to make changes to the insolvency framework. The first high-profile resolution was cleared last week, with Tata Steel acquiring Bhushan Steel in a Rs 35,200-crore deal with lenders. With the implementation of IBC, several issues had been thrown up and the government set up a 14-member high-level committee chaired by ministry of corporate affairs secretary Injeti Srinivas to suggest changes.

The ordinance proposes to bring homebuyers on par with financial creditors, which will ensure they get their homes or dues when a developer becomes insolvent. Homebuyers will get representation on the committee of creditors and the advance given by them to the builder will be considered credit.

To lower the voting threshold for approval of resolution plans to a 66% majority from 75% earlier. Withdrawal of an insolvency application will be allowed if 90% of the creditors agree.

The lower threshold is to encourage a resolution plan instead of liquidation. A higher limit would allow a few creditors to reject a plan and push the insolvent entity into winding up.

The first ordinance had Introduced Section 29A in the IBC, which barred many people and entities from bidding for companies undergoing resolution. It included promoters with recognised non-performing assets against their names.

Under the proposed change, promoters and managers or guarantors to creditors of MSMEs undergoing resolution would be able to bid for their companies, except in the case of proven wilful default. This was done because there was very little outside interest in MSMEs. This measure would ensure faster resolution of MSME cases.

The new ordinance makes Section 29A more stringent in some cases. It is expected to bar people who enter into backdoor arrangements with corporate debtors formally or informally, directly or indirectly, from bidding for insolvent companies by bringing them within the scope of the definition of connected people. The definition of related individuals, which has so far not been covered in the code, is likely to be added as part of the amendments.

IBC has come up with another remarkable amendment providing a great relief to the homebuyers and promoters. Aggrieved homebuyers can now move to NCLT against defaulting builders besides pleading before RERA Authority. This has widened the scope of resolving issues against the borrowers and make the Indian markets free of stressed asset for better in flow and outflow of money.