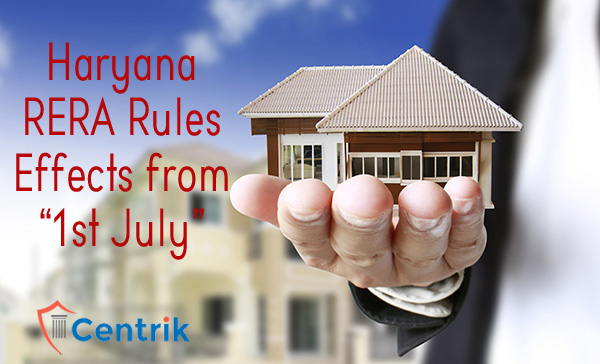 As per the information, The draft rules of the Haryana Real Estate Regulatory Authority (H-RERA) are set to come into effect from July 1. The town and country planning (TCP) department will soon submit a report on the draft rules to the government for them to be notified.

Homebuyers — especially those settled in areas where private realty projects are in the works and the ones who have waited long for their dream homes to be delivered—hope the new real estate rules will address the issues that they put forward and enable them to take developers to task for violating builder-buyer agreements.

Until now, the government had been considering any dispute between a buyer and builder as violation of a bilateral agreement and moving court was only option left for either party to resolve the matter. However, once the RERA rules come into effect, the developers, especially those who have not obtained completion certificates (CC) for their projects, would be penalized. Under the new rules, the errant builders could be put behind bars and their bank guarantees considered forfeited, besides other tough sanctions.

Only one group housing project in Gurgaon has obtained the CC so far.

“As per the draft rules framed by the central government, all projects built years ago should come under RERA ambit. However, the state government wants to exempt all finished projects where the buyers have already moved in. It only wants a handful of unfinished projects to come under RERA rules,” Gaurav Prakash, a homebuyer and member of Fight for RERA, a residents’ group, said.

Arun Kumar Gupta, principal secretary, TCP, Haryana, said, “We are likely to notify the H-RERA rules by the end of this month. We will consider every suggestion of residents before submitting the final report to the government. It would then be up to the government to consider the amendments and incorporate them.”

The town and country planning department received as many as 1,870 suggestions and proposed amendments to the RERA draft rules from across the state and, most, centered on ‘ongoing’ projects.

Homebuyers have hope that the government will incorporate their suggestions in the final RERA draft before notifying the same.

SS Oberoi, a resident of Uniworld Garden on Sohna Road, said, “We doubt if the TCP Haryana officials would address buyers’ grievances on dilution of the Centre’s RERA rules. The state government has watered down the original RERA rules to give developers an escape route. We want undiluted RERA. If not, we will move the Punjab and Haryana High Court against the state government.”