How to file an appeal with RERA Appellate Tribunal 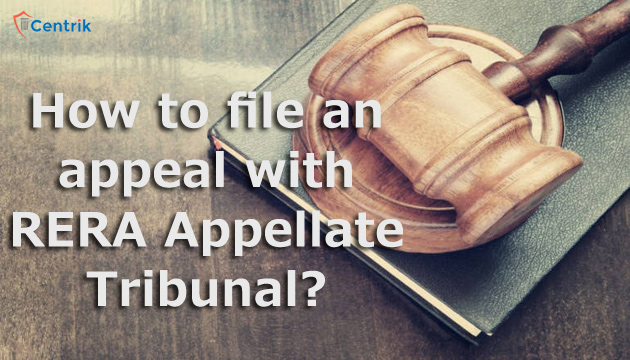 Recently, we have received lot of queries regarding the matter that order passed by State RERA Authority is not in favour of the party.

In this article I’ll be trying to address some of such grievances and try to educate about the above mentioned issues.

As we all are aware that Real Estate (Regulation and Development) Act, 2016 (hereinafter referred as Act) came into force form 01/05/2017, for amongst other, addressing the grievances of the aggrieved home buyer, and it is working effectively in almost every State and the authorities have passed number of orders, however the party against whom the order was passed they are still in dilemma where to appeal against the same. Although the MAHARERA Appellate Tribunal is working and till date have passed approximately 30 orders but the situation is little different in other states. So now let us analyse it on a legal ground so that it may be easy for you.

(2) Every appeal made under sub-section (1) shall be preferred within a period of sixty days from the date on which a copy of the direction or order or decision made by the Authority or the adjudicating officer is received by the appropriate Government or the competent authority or the aggrieved person and it shall be in such form and accompanied by such fee, as may be prescribed: Provided that the Appellate Tribunal may entertain any appeal after the expiry of sixty days if it is satisfied that there was sufficient cause for not filling it within that period.

(3) On receipt of an appeal under sub-section (1), the Appellate Tribunal may after giving the parties an opportunity of being heard, pass such orders, including interim orders, as it thinks fit.

(4) The Appellate Tribunal shall send a copy of every order made by it to the parties and to the Authority or the adjudicating officer, as the case may be.

(5) The appeal preferred under sub-section (1), shall be dealt with by it as expeditiously as possible and endeavour shall be made by it to dispose of the appeal within a period of sixty days from the date of receipt of appeal: Provided that where any such appeal could not be disposed of within the said period of sixty days, the Appellate Tribunal shall record its reasons in writing for not disposing of the appeal within that period.

(6) The Appellate Tribunal may, for the purpose of examining the legality or propriety or correctness of any order or decision of the Authority or the adjudicating officer, on its own motion or otherwise, call for the records relevant to deposing of such appeal and make such orders as it thinks fit.

Further every State RERA Appellate Tribunal has a right to decide the procedure for filing an appeal under Rule 25 of the UPRERA Rules let me quote the verbatim of the same.

Form for filing Appeal and the fees payable-

25-(1) Every appeal filed under subsection (1) of section 44 shall be accompanied by a fee of rupees one thousand in favour of the Appellate Tribunal.

(2) Every appeal shall be filed as per Form ‘L’ along with the following documents: (a) An attested true copy of the order against which the appeal is filed; (b)   Copies of the documents relied upon by the appellant and referred to in the appeal; (c) An index of the documents.

(3) Procedure for filing the appeal shall be as decided by the Appellate Tribunal.

Here we can easily figure out that the as the sub rule 3 of rule 25, the Appellate Tribunal can make its own procedure for filing an appeal. And under Sub Rule 2 of Rule 25 the appeal should filed as per Form L which is very much available on the UPRERA Website along with the fees of rupees one thousand in favour of the Appellate Tribunal.

There are few points which one should remember while filing an appeal with the appellate tribunal.

Conclusion – For filing an appeal against the RERA order, you have to approach to Appellate Tribunal. You are advised to make complete fact and legal analysis. For any clarification, please read to author at rera@centrik.in