Execution process under RERA recovery of arrears as land revenue 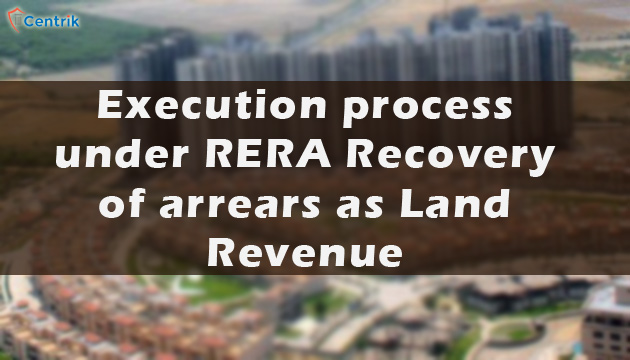 An order without execution is like half-hearted promises made by a lover who just leaves you before marriage. The Indian legislature though in its wise mind tries best to cover all aspects of justice which include the efficient execution of a court order so that the judicial order can reach it is finality. Real Estate Regulation and Development Act, 2016 (Hereinafter to referred to as Act)  which came into full force in the year 2017 has a very confusing way of execution for the laymen.

Section-40(1) of the Act states that any recovery from any real estate agent, promoter or allottee once an order is passed by the adjudication officer or the Real estate regulatory Authority as the case may be executed in “such manner as may be prescribed as arrears of land revenue”.  The dilemma arises here where it went on to state that in such manner as prescribed as arrears of land revenue but not to worry the process is as easy as walking down the street. The whole crux behind this section is that ultimate the law relates to building projects or flats which if you come to think of it is ultimate land in its true sense, so the only way to recover the ordered amount is through attachment and sale of the property concerned and the easiest way to go about is through the land revenue act.

The land is a state subject under schedule 7 of the Indian constitution and thus the states have the power to make laws with regard to it and therefore each state has already exciting land revenue acts. The land entitles itself some revenue for the state which if unpaid amounts to arrears and in case it goes into arrears the state attached the property and sells the part or whole of it as required for recovery of arrears. So, in case of RERA also once an order does not comply with the amount is termed as arrears of land and thereafter, an execution petition needs to be filed in the authority which passed the order. After which the concerned authority will issue a recovery certificate which is mandated under the land revenue Act and states the amount recoverable and the date it became due.

Now, once you have the recovery certificate the same is sent to the concerned DM of the city in which the property is situated who then recovers the said amount as a land arrear by attachment and sale of the said property.

This is the last leg in the whole process of claiming your rights as an aggrieved buyer. There is a lot of confusion among the newly established Real Estate Regulatory Authorities and also among the aggrieved buyers but slowly and gradually things are settling and as if today there is a lot more clarity with regard to the execution of orders.