Does States have the power to dilute the RERA Act 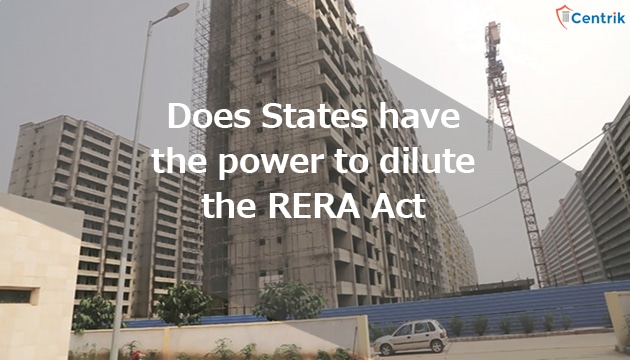 The Real Estate (Regulation and Development) Act, 2016 was introduced on May 01, 2017, the motive of the RERA Act is to provide the safeguard to the real estate industry and aggrieved home-buyers. As per the provisions of the RERA Act, 2016 the State Government shall make rules for carrying out the provisions of the Act within six months from the commencement of the Act.

The RERA laws explicitly says that the appropriate government shall only make rules for the smooth functioning of the act and it does not say anything about States powers to dilute the Central law. Having said that, the States notified such rules which clearly diluting the provisions of the RERA Act, 2016 and to the extent benefiting the Builders.

In the above context, the state of West Bengal has notified its own version of RERA which is called West Bengal Housing Industry Regulatory Authority (WBHIRA) and the same came into existence on June 1, 2018.The applicability of the two versions of the same law is creating confusion amongst the all the stakeholders; the developers of the Real Estate Projects are not clear that they need to get the registration under RERA laws or WBHIRA and if they don’t take the registration of the project so as per the Central Act they cannot advertise their project so this rift is fetching them the huge financial loss.

In the all hue and cry, one association of Homebuyers has filed a petition before Supreme Court which is challenging the constitutional validity of WBHIRA, they claimed that the West Bengal Government had not even obtained the president assent. The Hon’ble Supreme Court has admitted the petition and asked the State to file a reply within two weeks. The association has a clear intent that they want to repeal the State law as the applicability and implementation of WBHIRA is the violation of the constitution.

In the light of all the applicable provisions of RERA Act, 2016, the State while making and framing the RERA rules should keep in mind that it should only act as a catalyst for the implementation of the RERA Act, any dilution or deviation may defeat the purpose of the Act.