Difference between NCLT and DRT 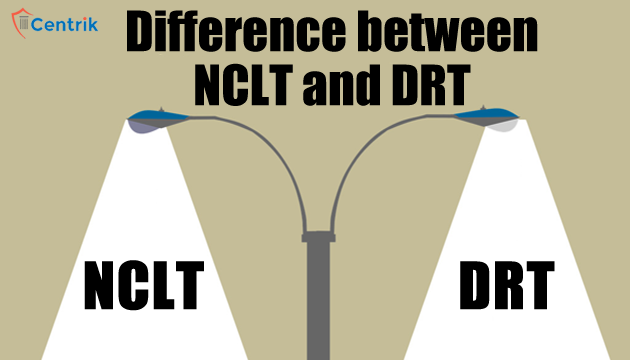 On top of the Taj Mahal, India boasts other gems – Mumbai is the finance capital and Bangalore is said to be India’s Silicon Valley. Their steady growth has been led by fast-paced urbanization and high consumption. But the Indian government has plans to transform India’s economy and develop manufacturing capabilities to meet domestic and international demand. To make this setup efficient the Indian markets have to be free of bad debts and non-performing assets. In order to do so different authorities were set up like National Company Law Tribunal and Debt Recovery Tribunal. The pending cases were on a long queue in front of the High Courts, Consumer Forums, Company Law boards of debt recovery and company related matters. The government decided to divide the work and distribute it to different authorities. That is how these tribunals came into existence for speedy disposal of company cases and help India in its Ease of doing Business target and make India one of the hotspot for business and foreign direct investment.

In this article we will discuss about NCLT and DRT in brief and the difference between them and how can corporate bodies approach NCLT against their borrowers/debtors.

The NCLT or “Tribunal” is a quasi-judicial authority created under the Companies Act, 2013 to handle corporate civil disputes arising under the Act. It is an entity that has powers and procedures like those vested in a court of law or judge. NCLT is obliged to objectively determine facts, decide cases in accordance with the principles of natural justice and draw conclusions from them in the form of orders. Such orders can remedy a situation, correct a wrong or impose legal penalties/costs and may affect the legal rights, duties or privileges of the specific parties. The Tribunal is not bound by the strict judicial rules of evidence and procedure. It can decide cases by following the principles of natural justice.

Debt Recovery Tribunals were established to facilitate the debt recovery involving banks and other financial institutions with their customers. DRTs were set up after the passing of Recovery of Debts due to Banks and Financial Institutions Act (RDBBFI), 1993. Appeals against orders passed by DRTs lie before Debts Recovery Appellate Tribunal (DRAT). DRTs can take cases from banks for disputed loans above Rs.10 Lakhs. At present, there are 33 DRTs and 5 DRATs functioning at various parts of the country. In 2014, the government has created six new DRTs to speed up loan related dispute settlement.

The differences between NCLT and DRT are mentioned below-

Under which authority a Corporate Body can sue its debtors?

Corporate bodies still do not have access to Debt Recovery Tribunal for recovery procedures but they can approach the NCLT for winding up or liquidation of their debtor’s company besides filing a recovery suit under Order 37 of Civil Procedure Code.

These steps of establishing tribunals were taken to speed up the disposal of recovery related matters and company related issues. Although these developments were made to ease the business sector but it has somehow confused the people as to which court or tribunal to approach in case of any discrepancy. In this article we have briefly tried to clear out this confusion and explain the scope of these tribunals. Now the Companies can litigate against their debtors and sue them for recovery or liquidation of their Company. It is very imperative to know the law and order of the land and where to approach in case of need.