Difference between Insolvency and Bankruptcy 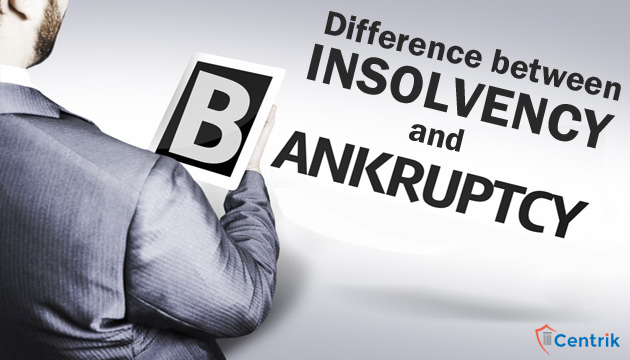 Generally people mix the two terms Insolvency and Bankruptcy. Even though they might relate to or identify the state of the company or individual which is ‘one’ but both the terms are different and should not be used as analogous to each other.

When a company is involved into some business of manufacturing certain products which are to be supplied to various distributors, now initially the demand of that particular product in the market was at high rate but somehow in the later stage of the business the demand of those products suddenly fell due to which the Company is not able to generate the revenue which was earned earlier by the company but the expense in lieu of the production remains same i.e. high. Therefore, this decline in the revenue of the company which consequently leads to the situation of financial inability of the company as the liabilities keep on exceeding the assets or the debts exceeding of the company and make the company insolvent.

Bankruptcy is termed as legal declaration of insolvency i.e. one’s inability to pay off debts. Insolvency is just the state where the financial inability is reached whereas the bankruptcy is the realization and announcement of that the state of being insolvent.

What is the benefit of being declared as insolvent or undergo the bankruptcy?

When an individual or a company is financially incapable of paying off its debts in time or the value of assets stands less than the value of the liabilities, then  by undergoing the process of bankruptcy debtors figure out a plan or restructure its payment plans to be easily met with the help of government or adjudicating authority. There are mainly two forms of bankruptcy:-

As the name suggests this bankruptcy takes place to reorganize or find a resolution to pay off the debts in a timely manner. this is also called Corporate Insolvency Resolution Process as per the Insolvency and Bankruptcy Code, 2016 wherein the business of the company is run afresh with some new plans pursuant to which the whole company is under the control of Insolvency Professional who finds a best feasible way out to discharge the liabilities of the company.

If the resolution process does not work properly and no viable resolution so as to discharge the liabilities has been reached then the liquidation takes place pursuant to which all the assets of the company are sold or disposed of in the best possible manner, thereafter, the sale proceeds are utilized to pay off the debts owed by the company to the creditors.