Developers refraining from registering with RERA 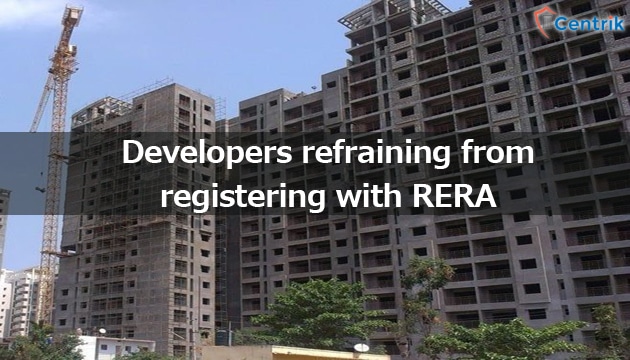 Even after two years of implementation of the RERA Act, various developers have failed to get their projects to register with their respective RERA Authorities.

In states like Bengaluru, there are more 1000 developers who have not registered themselves with the RERA Authority. The authority issued notices to all the developers to register themselves however only very few of them the register themselves and a very few promoters have submitted their explanation claiming exemption under the provisions of the Act and rule but have failed to produce relevant documents before the Authority.
Since the developers intentionally failed to register their projects with the RERA Authority, the Karnataka-RERA secretary wrote a letter to CREDAI, requesting it to facilitate the registration of unregistered projects by encouraging developers to appear before the Authority. RERA identified that around 1076 project are registered and are under investigation, the authority’s secretary said not only have the developers’ not responded to the notices, and they have not explained the reasons for not registering with RERA as per the provisions. A majority of these projects are in developed in Bengaluru.

Activists are fighting for the effective implementation questioned the RERA authority for not initiating action against these projects which are under investigation.  One of the RERA activists said that the “RERA can verify the plan approval sanctioned to projects that are under the scanner. They can even freeze their bank accounts”.

To which RERA authorities say it will become a humongous task to track project promoters as at times promoters’ registered offices do not exist or emails bounce back. In several cases, there is no way we could find out and track the promoter. Also, RERA Authorities cannot initiate penalty provisions without giving the project giving them an opportunity to present the case.

Looking into the above scenario the Karnataka-RERA must also initiate step taken by RERA-Patna. The RERA-Patna froze the bank accounts of the developers for not replying to the repeated notices due to non- registration of projects.  Since Karnataka- RERA has already given enough chances to the developers to register themselves now it must take the appropriate steps so that developer gets themselves register.