Deregistered Projects and Homebuyers- The Road Ahead 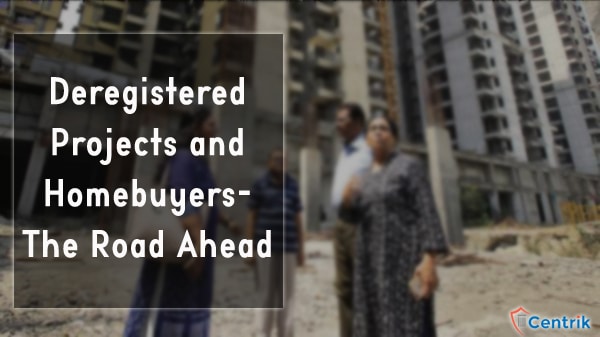 Uttar Pradesh Real Estate Regulatory Authority (UP RERA) deregistered three phases of housing project Aranya last month, which was being constructed by developer Unnati Fortune Holdings Ltd. in Noida. The deregistration came w.rt. the provisions given under Section 7 of the Real Estate (Regulation and Development) Act, 2016.

This is the first time that a RERA Authority has ordered the deregistration of a project on the grounds given under section 7 of the RERA Act, 2016. The aggrieved homebuyers approached UP RERA in September,2018 against the developer with complaint of project delay and other irregularities. Estimated at over ₹ 1,500 crores, the project began in 2007, however, since then 12 years have passed and the project is not yet finished. UP RERA in its order stated that the project contained serious financial and allotment irregularities and the developer failed to respond to the show-cause notices several times, having the question as to why the three phases of the project should not be deregistered.

Upon deregistration, Authority has the power to freeze the bank accounts related to the project, and the developer is not allowed to make any payment or withdrawals from these accounts without the authority’s approval. In this case, UP RERA froze the bank accounts related to the developer after giving the order. Apart from the known accounts, Authority came to know about other bank accounts from the home buyers and is in the process to freeze them too. The authority initially only knew about two bank accounts but there were around 30 bank accounts in total which were used to collect the money from the homebuyers. Out of these 30 accounts, 20 of them are still in the process of being frozen.

What’s ahead for homebuyers?

After the deregistration, the responsibility to complete it and provide timely possession to homebuyers falls on the authority. Though it is not the preferred choice by anyone and is on the last resort by RERA Authority to help the buyers.

The decision for homebuyers to complete the construction also depends on the status and health of the project. It can only be initiated when the project is already 80-90% completed and the delay is due to reasons other than lack of funds.

In this case of project Aranya, UP RERA has told the homebuyers that they would be fully assisted by the authority, if the decision to complete the project on their own is taken. The authority has the mechanism in place to support such an endeavor. In other words, RERA has taken the project under its wings and since this is the first-of-its-kind decision, it’s expected to set a precedent in the field of real estate regulation.