Delay under IBC not Acceptable 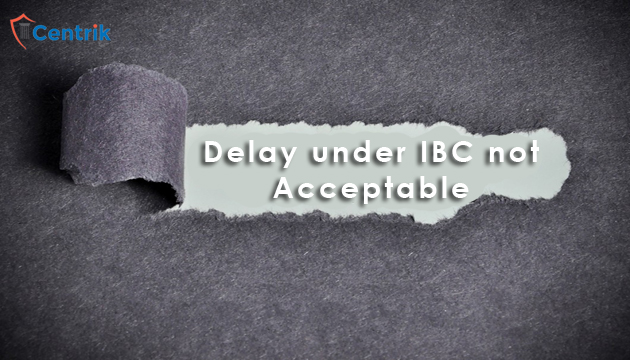 Insolvency and bankruptcy code, 2016 (IBC) have been enacted with the objective of reorganisation or revival of the corporate debtors in a time bound manner. The intent behind the legislation of IBC was to effectively help the creditors to recover their stuck money or debts.

There are two important pillars under IBC for effective implementation of the new code i.e. Resolution professional (RP) and Adjudicating Authority (NCLT). Both of the aforementioned roles are entrusted with key responsibilities under IBC in a time bound manner.

Once a default occurs, any creditor (financial or operational) can file the application before National Company Law Tribunal (NCLT) for initiating Corporate Insolvency resolution Process (CIRP) under section 7 or section 9 of IBC respectively. Thereafter, the NCLT has to admit or reject the application within 14 days of filing of application.

Further if the application gets admitted under IBC then the whole CIRP has to be completed within the time frame of 180 days including the justified extension of 90 days i.e. 270 days. No delay beyond the extension period of 90 days is allowed.

Keeping the above intent behind the legislation, NCLT has helped in recovery of more than Rs. lakh crore within the last year i.e. 2017 and has proved to be an efficient law till now.

Even after coming of IBC into picture some big corporates undergoing IBC has experienced delay in the timely resolution of those companies. These delays have been arisen due to some unanswered or loose ends in the law which is settling down by the time.

Once the law is settled and lays down a proper mechanism, the delay should not extend unreasonably which hinders the essence of the code.

Even after removal of the disqualification the matter could not be settled in  a time bound manner. These delays unnecessarily complicate the issues and hinders the timely execution of the resolution process.

Through our resources we came to know that Central Government has seeked the explanation from NCLT and RP about the delay which has occured in the resolution of some big companies. Central Government also directed the NCLT to adjudicate timely in such matters so that the matter should not deviate from the prescribed time line laid down under IBC.

In the light of various effective decisions laid down by the NCLT and several delays which have been caused in the effective implementation of IBC. Central Government and the Apex court has shown interference wherever the unnecessary delay has arrived.

Overall the IBC has become the choice of most of the debtors due to which the NCLT has been burdened with abundant of responsibilities. Therefore, if anyone is looking to recover their debts in a time bound manner or resolution of the corporate debtor in a timely manner then IBC provides the necessary redressal.