Defective land title and its remedies under RERA 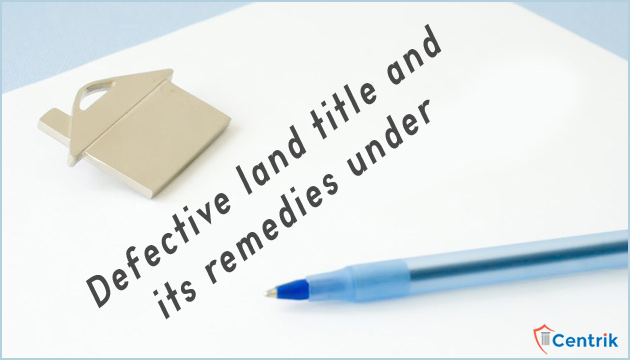 Land title is one of the most litigatious and controversial subjects in India and Land being the integral part of the Real Estate industry also fetches some problems to its stakeholders.

In many recent instances, it was observed that many builders or developers muddled with the money of the home-buyers by selling the apartment, plot or building on a land which has some glitches in its title.

With the introduction of the Real Estate (Regulation and Development) Act, 2016 the explicit provisions regarding the aforesaid problem has come into existence, wherein remedies for the home-buyers who are aggrieved because of the defective title of the land can file a complaint before RERA Authority or Adjudicating officer of the State and claim for the compensation for any damage or loss.

Owing to these problems, the home buyer who has invested all his hard earned savings and life earnings is placed in the position of risk to lose all his money. Having said that, the same is not the scenario now after RERA came into picture. Section 18 (2) of the RERA Act comes for the rescue of such aggrieved home buyers, which states that “the promoter of the developer shall compensate the allottees in case of any loss cased to him due to the defective title of the land, on which the project is being developed or has been developed, in the manner as provided under this Act, and the claim for compensation under this sub-section shall not be barred by limitation provided under the law for the time being in force.”

Thus, we can reach to the conclusion that, the implementation of RERA Act, 2016 has given a shy of relief to all those home-buyers who are in the state of predicament because of their money being stucked in the project where title of the property is in question.