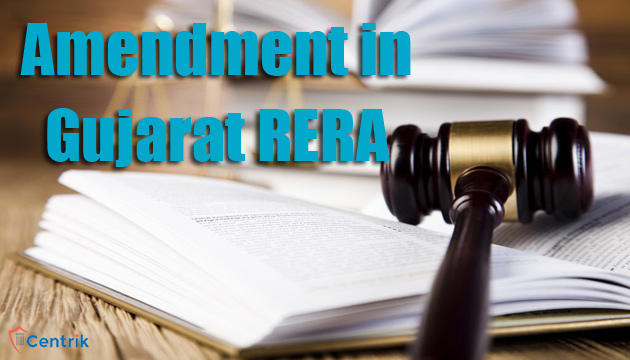 On 17th May 2018, the Gujarat RERA has come up with some latest amendment introducing new procedure for complaint filing and redressal. It introduced necessary changes through regulations and amendments. To adopt these rules, it is necessary to perceive the changes made.

Section 12A clearly specifies that a complaint can be instituted by filing to the authority in 3 sets. The complaint should have particulars of dispute and the relief that is claimed. The complainant is required to attach the documents which will help to prove the claim made in the complaint. Once the complaint is filed, it has to be numbered by authority and if in case any defects are noticed, the same has to be recorded and informed to the complainant, asking him to remove those defects within 15 days time period. The rules also contain the provision for the situation wherein the party disputes on the correctness of the defects pointed out by the authority. The provision states that such matter has to be placed before the Secretary of Authority for appropriate orders.

Also the complainant is required to serve the copy of complaint and the documents to the opposite parties directly by the post along with the acknowledgement receipt. Once the respondent has put in appearance, no further application can be filed before the authority without the endorsement stating that a copy of the same document has been served to the other side.

The proceedings before the Adjudicating Officer is to be performed expeditiously and in case of adjournment the reasons are to be recorded. If the opposite party demands the cost of adjournment, the same shall not be less than INR 500 per adjournment but can be more depending upon the nature and value of complaint or as the Officer deems fit.

The regulation mentions that any person who is a party to the matter can either present in person or can authorize someone to present his case before authority. The person so authorized has to file a memorandum of authorization. The terms and conditions of the matters pertaining to rule 6 of Gujarat Real Estate Rules 2017 are to be determined. For such matters, representatives can be authorized to plead on behalf of the allottees. Power to summon and enforce the attendance of all persons concerning the real estate project has been laid down on authority.

The order has to be a written reasoned order along with the signature of the Chairperson, Members or the Authority hearing such proceedings. The signed orders and decisions shall bear the seal of the authority and the same is to be communicated as expeditiously as possible. The authority has the power to make necessary directions required to collect information, inquiry, investigation, search and seizure without prejudicing its general powers. The said power can be exercised to direct the Secretary or any one or more Officers or persons to furnish information for the matters within the jurisdiction of the Authority. A specified time period will be allotted by the Authority to submit the report. The authority can also authorize the Secretary or Officer to direct a person to produce the books, accounts, etc. or to furnish any sort of information to be examined and kept by the concerned officer. The power to issue directions can be used to collect any particulars or documents that are necessary to discharge of its functions mentioned under the Act and the Rules. Insufficient and inadequate information can result in direction for further inquiry, report and furnishing of information. The amended rules allow the reasonable opportunity to raise objections and make submissions on the report submitted.

Any aggrieved party upon discovering new evidence or any evidence which he could not produce at the time when direction was passed can file for review against the direction, decision or order of authority against which no appeal has been preferred and from which no appeal is allowed. Such person has to apply for a review of the said order within 45 days of the date of direction. The review has to be filed in a manner similar to that of a complaint mentioned in the rules. The authority has the power similar to a civil court under Code of Civil Procedure, 1908. The application can be rejected by the authority if there exist no sufficient ground for review. The review petition cannot be granted without notifying the opposite party to enable them to appear and put on their arguments in support of the decisions or order.

If in between the ongoing proceedings, any of the parties die or has been declared insolvent or in case of company which has gone into liquidation can continue the proceedings with other partners, executor, liquidator or any legal representative of the party concerned. If the authority is of the view that the successor-in-interest is required on the record of the case then, the proceedings are abated with the reasons recorded. When the person wishes to bring such a successor-in-interest in the proceeding, an application for the same has to be filed within 90 days of the event.

The power laid down also includes the power to amend any defect or error in any proceedings plus the authority can make all necessary amendments rectifications so required to determine the real question or the issue of the proceedings. Before making such changes and amendments the parties need to be informed so that they have an opportunity to make any representation and submissions with respect to the changes proposed by the Authority.

The above discussed changes are the changes brought in by the Amendment Regulation 2018 in Gujarat.