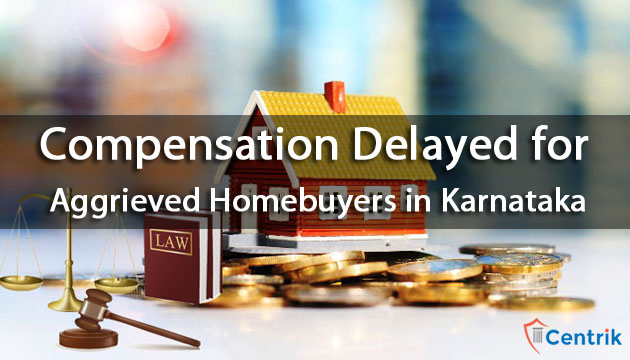 Hundreds of homebuyers in Karnataka have been left in the lurch as they still haven’t received compensation from the developers. The Karnataka RERA has already passed orders against these errant developers and penalized them for not delivering possession as per the date of possession they had specified at the time of registering the project with the real estate authority and as per the Builder Buyer Agreement which had been signed between the developer and the purchaser.

K-RERA has gone as far as intimating the district commissioner to auction off the properties of these errant developers so that compensation could be paid to the aggrieved home buyers who have canceled their allotment and want a refund along with appropriate interest as per the delay in delivering possession of the flat. Ever since it’s inception in the year 2017, the Real Estate Regulatory Authority has heard 3,750 complaints out of which it has disposed of 1,150 cases in favor of homebuyers. Most of the complaints that have been registered with Karnataka-RERA relate to the inability of builders in completing their projects and handing over possession to the home buyers on time.

The authority has clearly stated that if the buyers fail to comply with the orders of the authority then they will attach and subsequently auction of their properties to compensate the homebuyers who are awaiting compensation but not a single buyer has yet been compensated. A prime example being that of home buyer Rajeev Kumar Agarwal who was to get Rs.1 crore from his developer but there is no indication as to when that money will be disbursed to him.

In fact, K-RERA has referred 117 cases to the District Commissioner where they have been ordered to recover compensation from the errant developers. Many of these cases have been pending since the last two years and the compensation ranges from Rs.2 Lakh to Rs.1.5 Crore. As a result of the inordinate delay in disbursing the compensation, many exasperated buyers have struck a compromise with the developers and settled for a lesser amount. However, the district commissioner of one of the districts in Bengaluru said that show-cause notices have been issued against 44 errant developers to attach their properties if they don’t comply with the orders of the Real Estate Regulatory Authority in Karnataka. Thus, there needs to be an effective system of checks and balances that the real estate regulatory authority should come up with so that they can address the concerns of aggrieved homebuyers in a better way and at the same time also make sure that the developers are not dealt with arbitrarily.

Disclaimer – Please note that the above articles are based on the interpretation of related laws and judicial pronouncement which may differ from person to person. The reader is expected to take the expert opinion on the matter.
Share