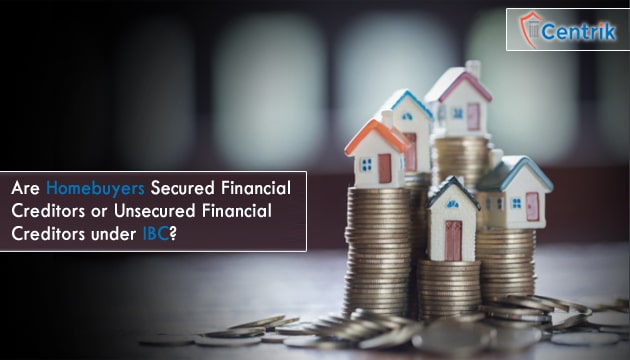 In the present day scenario, homebuyers have been given acknowledgment of their rights as defined in  Real Estate (Regulation & Development) Act, 2016 (RERA) and the Insolvency and Bankruptcy Code, 2016 (IBC). Wherein RERA provides a short term solution to the problems, IBC eliminates the problem by undertaking the default and delay caused by the Builder. The Insolvency & Bankruptcy Code, 2016 was amended through the Insolvency and Bankruptcy Code (Amendment) Ordinance of 2018, following which the home buyers and allottees, got the status of financial creditors under Section 5(8)(f) of IBC.

The ordinance has brought a sense of security and protection to the homebuyers and has enabled the homebuyers and other allottees to be able to invoke Section 7 of IBC, which allows financial creditor(s) to file an application before the National Company Law Tribunal (NCLT) for initiating corporate insolvency resolution process against a defaulting company/developer/builder. Interestingly, there are two kinds of financial creditors and the confusion lies as to, in which category the homebuyers fall.

A FINANCIAL CREDITOR, u/s 5(7) of IBC, is a person to whom a financial debt is owed and includes a person to whom such debt has been legally assigned or transferred. Whereas, a SECURED CREDITOR is any creditor or lender who is associated with an investment in an asset or issuance of that asset, which is backed by collateral. If a borrower defaults, the secured creditors have a legal right to the asset used as collateral, which can be seized and sold to pay off the obligations. On the other hand an UNSECURED CREDITOR, is an individual or institution that lends money without obtaining specified assets as collateral. This poses a risk to the creditor because it will have nothing to fall back on if the borrower defaults.

Under IBC, the difference between secured financial creditors and unsecured financial creditors mostly has an implication on the priority of payments upon liquidation of the company. One of the interpretations with regard to homebuyers being unsecured creditor is that, while the homebuyers credits the money to the developer without obtaining a collateral, their right on asset is only ensured when the asset is transferred to them by the developer. This makes them an unsecured creditor to the developer.

However, until now there has been no further clarification as to whether the home buyers are secured financial creditors or unsecured financial creditors, but in consideration of the recent developments, one thing is sure that the result will be in the interest of homebuyers only. The Government has left no stone unturned to bring justice to the cause of the aggrieved homebuyers and the same can be felt vide the amendment brought in IBC.