All about DIR-3 KYC 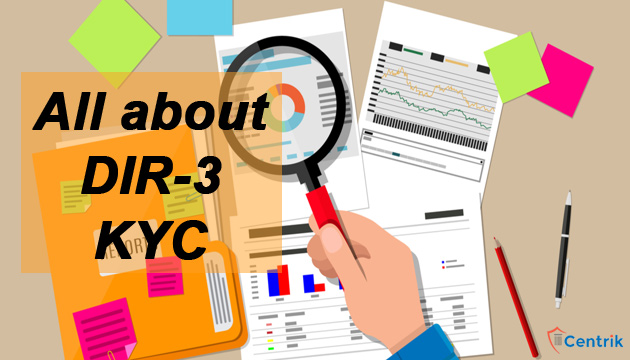 As part of updating its registry, MCA would be conducting KYC of all Directors of all companies annually through a new eform viz. DIR-3 KYC to be notified and deployed shortly. Accordingly, every Director who has been allotted DIN on or before 31st March, 2018 and whose DIN is in ‘Approved’ status, would be mandatorily required to file form DIR-3 KYC on or before 31st August,2018.

Directors at companies will soon be required to share their personal mobile numbers and e-mail ids with the government as part of verifying their credentials, in the midst of continuing efforts to cancel bogus directorships.

In a significant move, the corporate affairs ministry has decided to carry out KYC (Know Your Customer) process for all directors, including those who have been disqualified.

A new electronic form is set to be introduced specifically for the directors through which all required details have to be submitted to the ministry, according to a communication.

The e-form — DIR-3 KYC — would be “notified and deployed shortly” as part of updating the ministry’s registry.

Director Identification Number (DIN) is a unique number allotted to individuals who are eligible to have directorship on the boards of registered companies.

According to the ministry, the form should be filed by every director using his own DSC and should be duly certified by a practising professional — chartered accountant, company secretary or cost and management accountant.

After the deadline, the MCA 21 system would mark all approved DINs — allotted on or before March 31 this year against which DIR-3 KYC form has not been filed as ‘de-activated’.

The de-activated DINs would be allowed after payment of a specified fee and such individuals could also face action.

Last year, the ministry had disqualified more than three lakh persons from holding directorship at registered companies These individuals were directors at firms that were not carrying out business activities for a long time.

Hence Ministry has made the form DIR-3 KYC mandatory for all directors to verify the credential of directors.