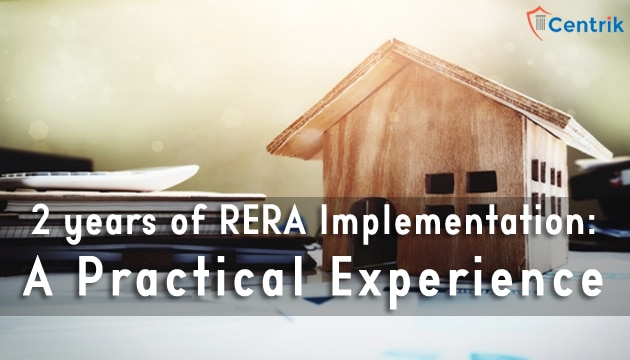 On the occasion of completing 2 years of RERA, Centrik having solved more than 6700 cases, wishes to extend its experience and help to provide 1st consultation FREE OF COST to the aggrieved parties.

Our experience with RERA Journey so far-

As you are aware that the Real Estate (Regulation & Development) Act, 2016 which was first set of laws to regulate the Real Estate Sector and provide time bound grievance redressal, was made effective from 01/05/2017. After the many high-value and renowned real estate frauds and failures, these laws was a big relief and hope for aggrieved home buyers. Now it has completed 2 years of its implementation.

We, at Centrik has tracked and been with RERA since its 1st day of implementation. During these 2 years of journey, the RERA Deptt of Centrik has resolved more than 6700 assignment relating to RERA and Insolvency laws on different issues. Having a presence in major of the States, our RERA team of more than 30 professionals has dealt with the issues in almost in every State. Let’s share a brief of RERA journey so far;

We believe that in the last 2 years, everyone was learning as to how RERA should be implemented to achieve its objectives. Further, since there were a lot many issues before RERA which are being addressed by the Regulatory authorities, the process is being developed slowly.

We hope that now this revolutionary law would speed up to provide more and more relief to aggrieved parties and regulate the real estate sector in a transparent and efficient way.

Note: The above article is based on the personal experience and interpretation of respective laws which may differ from person to person. the readers are expected to get advise from the expert before placing any reliance. For any issue/clarification, the reader can be reached at rera@centrik.in. For more information please check our website at www.centrik.in