7 Clauses Which Every Indian Should Know About Special Marriage Act 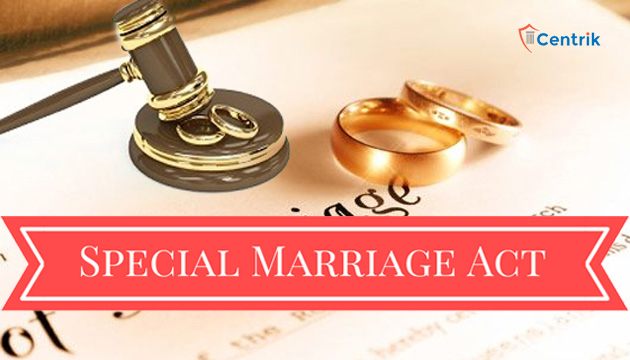 ‘Marriage’ is a spiritual institution in our subcontinent.  Marriage is important part of our culture. India is a diverse country and has people from a number of religions and cultures, residing here.

In India arranged marriages are considered best way to get a boy and a girl to tie the marital knot. Indian parents are utmost interest in it, right from the girl or boy they want their child to get married to, until the date and time of marriage. There was era when marriages were commenced without knowing each other, as every decision was taken by their respective parents now times have changed and every decision relating to marriage is taken by the bride and groom themselves.

Parliament enacted the Special Marriage Act, 1954 which provides special form of marriage for the people of India and all Indian nationals in foreign countries, irrespective of the caste and religion they follow.

It’s very important that every Indian should know these basic things about the Special Marriage Act. Today we are telling you those 10 things-

The Special Marriage Act deals with inter caste and inter-religion marriages. Inter-caste marriage is between people belonging to two different castes. Now the youth have own choice and they prefer getting married to someone who has a better compatibility with them rather than marrying someone who belongs to their caste or their religion. It is them who have to live with their partner for the entire life and thus caste or religion is not a matter of utmost consideration at all now. Love is a beautiful emotion and it should not be weighed with something like caste or religion. All religions are equal and marriage amongst it should not be a big deal. Thus, the Special Marriage Act is a special legislation that was enacted to provide for a special form of marriage, by registration where the parties to the marriage are not required to renounce his/her religion.

2. Application of the Act

This Act covers marriages among Hindus, Muslims, Christians, Sikhs, Jains and Buddhists. This act applies to every state of India, except the state of Jammu & Kashmir. This Act extends not only to the Indian citizens belonging to different castes and religions but also to the Indian nationals living abroad.

As Indians believe in marriages with proper rituals, customs, and ceremonies involving pomp and show & extravagant celebrations, the Special Marriage Act do not require any of them. If both the parties are ready to marry each other, that suffices it; here caste, religion, race, etc. do not act as a hindrance to their union. Under this Act, the parties need to file a notice expressing their intention to marry each other, with the Marriage Registrar of the district in which at least one of the parties to the marriage has resided for at least 30 days preceding the date on which such notice is being filed. These are the basic requirements for a valid marriage under the Special Marriage Act, which every Indian must know.

A special form of marriage is not very different from the requirements of other normal marriages, which happen within the caste. These are the conditions to be eligible for a marriage under this Act: –

5. Changes with the Emergence of Special Marriage Act in India

Since it is known that inter-caste or inter-religion marriages are still considered a taboo in our country the establishment of Special Marriage Act was a great urgency. If we look at the positive side of these marriages, we can find that they have added to our national integrity. Unlike earlier times, nowadays people are attracted more to the opposite sex, belonging to other castes and seldom end up considering the communal side of it. People from higher castes tend to fall in love with people from lower castes and get married to them. These marriages encourage equality amongst the citizens and as a result of it people try to interact more with each other and understand and respect each other and their differences.

A marriage is said to be void, where the conditions mentioned in point no.4 are not met with, and the children from such marriages who would have been legitimate if the marriage had been valid, shall be legitimate, whether such child is born before or after the commencement of the Marriage Laws (Amendment) Act, 1976 (68 of 1976), and whether or not a decree of nullity is granted in respect of that marriage under this Act and whether or not the marriage is held to be void otherwise than on a petition under this Act as mentioned in Sec.26 of the act.

7. Restriction on Divorce during 1styr of marriage

The Special Marriage Act, must know about this important provision of the Act. The parties cannot petition for divorce to the District court unless and until one year has expired from the date of their marriage as registered in the marriage books.  But, in cases where the court is of the opinion that the petitioner has suffered exceptional hardships or the respondent has shown exceptional depravity on their part, a petition for divorce would be maintained, but if any misrepresentation is found on the part of the petitioner to apply for divorce before the expiry of 1 yr, the court may if any order has been passed, state the order to take effect only after the expiry of 1 yr, as mentioned in sec. 29 of the Act.

Hence, we can say above discussed general and legal aspects of Special Marriage Act, holds high importance not only for the people who have registered their marriage under the act but also to all the citizens of the country in order to have a better understanding of the law and treat the marriages between different castes and religions.