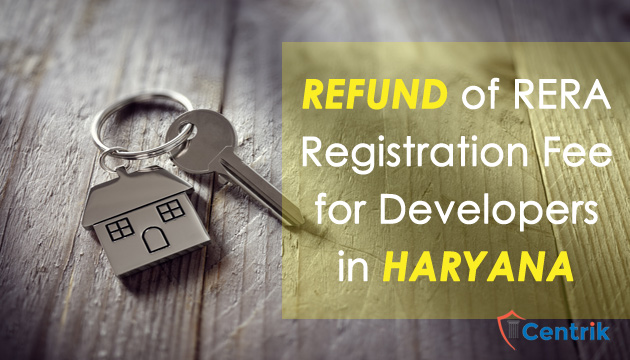 Another blessing for the developers in Haryana under the Real Estate Regulation and Development Act (RERA) is now at its peak. Since there have been changes in the Haryana RERA Rules the developers who registered themselves under the draft RERA Rules notified on 27/04/2017 may ask for a refund for excess RERA Registration fees paid as compared to the fees prescribed by final Haryana RERA Rules notified on 28/07/2017.

The Haryana Government as powered by  Real Estate Regulation and Development Act (RERA) vide its notification dated 27/04/2017 set out the first set of Draft Haryana RERA Rules for public feedback. Since the RERA Act was set to make effective from 01/05/2017, RERA authority in Haryana started RERA registrations as per said draft Haryana RERA Rules. Under the said draft RERA Rules, the rates for project registration were prescribed under Schedule 1 which is as under :

Later on, Haryana Government finalised Haryana RERA Rules vide its notification dated July 28, 2017, wherein the fees for RERA registration for projects were reduced. The revised schedule-I as per the rule 3(2) under Final Haryana RERA Rules, 2017 is produced as under:

Due to the reduction in RERA registration fees and zone categorization, the projects which have submitted their RERA registration application before 28/04/2017 with RERA fees as per draft Rules shall be eligible for the refund of excessive fees. The quantum of excessive shall be computed with reference to the maximum FAR for the project. In this regard, an application shall be filed with Haryana RERA authority with the following documents

(i)  Application for refund of excessive fees

(iv) other documents which may be prescribed