Power of the government to supersede RERA Authorities 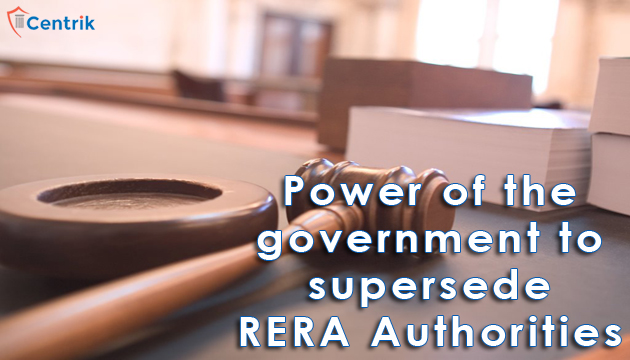 The Real estate (Regulation and Development) Act, 2016 came into force with the purpose of regulating the Real Estate sector. In order to execute the RERA provisions every State had to establish the RERA Authorities, most of the States have established the Real Estate Regulatory Authority but still, there are some States which are lacking behind and now trying to take a pace. But even after the 2 years, there are many lacunas wherein the authorities are not aligning their functions as per the preamble of the Act.

In many States without looking at the grievance of the home-buyer, the RERA Authorities are giving orders which are not up to the expectations. If the project is 50% completed they are not giving the refund to the home-buyers, no matter how long their money was stuck with the builder.

Once the notification of supersession has been issued and published by the government then the existing the Composition of the Authority must be dissolved by vacating the office by chairperson and members and the powers functions and duties as per the provisions of the act must be discharged by the appointed person for supersession.

After the expiry of the period as mentioned in the notification the government shall reconstitute the Authority by fresh appointment of chairperson and members.

Looking at this arrangement of the Act we are under the opinion that the Government should keep a regular check on the authority by reviewing the policies and the conduct of the Authorities and in case there are some irregularities found the government should take over the Authority and bring it back on the track.